For those who’ve been following along, I recently started a new project team that’s working on pretty much a green-field type of a project. I’ve been using mind-maps to kick things off, in various areas of the teams’ initial effort, and have now extended it as a way to build the functional backlogs that the teams will work on.

Essentially, what that means is this – imagine that we, along with an analyst (or a team of analysts) sit down to brainstorm an area of the application. We always start with the high-level ‘project’, lets call it Todos2Go. Just to retain context, lets also go ahead and list out the high-level functional areas of the application. These include modules we already discussed and elaborated, they certainly include new modules we want to include in our system. So in our example, Todos2Go would start with the basic todo-list creation module. It might also have a collaboration module, a search module with advanced search options, a calendar integration piece, an RSS generation module, an email interface module, a tagging and tag-browsing piece, and others. The analyst team doesn’t worry about trying to capture everything at any given point of time, knowing that they will be revisiting these requirements (the mind map) whenever they need to. So at this point, here’s what we have –

Remember, we’re only capturing functionality from a business requirements perspective right now. Things like config-management, architecture, etc. are somewhat orthogonal areas. They’re captured in a different mind map. Also, we’re not concerned with scheduling right now – as in, when a particular piece might get built. Those decisions will be made based on business priorities, technical dependencies, and developer estimates. So, onward! Lets continue following the analyst team as they keep using the mind map to go further and further into details.

The analyst team picks one module that they’re going to focus on for the moment. They decide that since they’re just starting the project, they might as well pick the one they know best (from previous versions of the software, or from market research) – a basic task-management feature – the Todolists module. So they start to discuss the things the user might want to do, and/or how they would like to break the functionality down for development. Here’s something they might come up with –

The idea is simple. Keep breaking things down as you go down a path of functionality. In other words, go ahead and do plain ol’ functional decomposition. Again, remember to view things from a business requirements perspective. This means that ‘design database schema’ is probably not something that ought to appear on this mind map. The numbers next to the items are simply ID numbers, for tracking purposes, and will be of use later on. This view is what I’ve started to call Story Trees, thanks to a colleague – Roger Marlow.

Also, since most people use Excel to track projects (so do I, and I will continue to do so until Mingle launches), here’s how I capture this meeting artifact (it’s usually a whiteboard thing) in a spreadsheet – 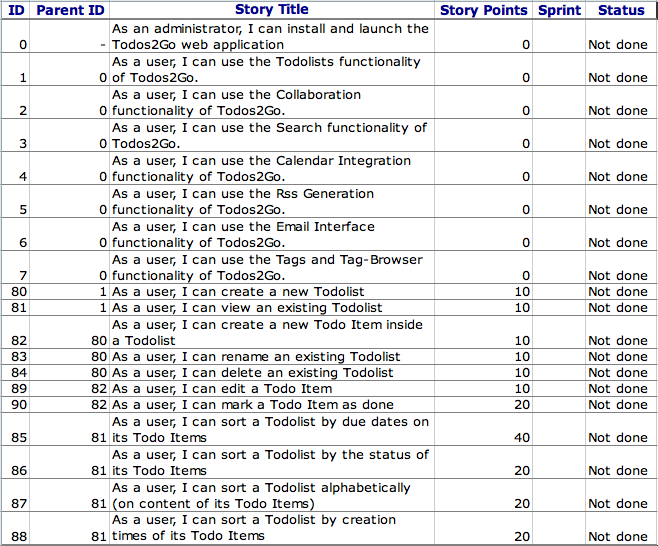 The Parent ID column is simple. It is just the ID of the bubble in the mind map that is a ‘parent’ of a given bubble. This way, a simple script can be written to reconstruct the mind map if needed. The reconstructed version of the mind map can sport color-coding based on status, priority, or whatever else one might consider useful. More on this script (or my version of it) in another blog post.

So, I do hope this was useful. This is a simple meeting technique for project managers to use to facilitate requirement gathering workshops or business analysis sessions. Again, as I mentioned in one of my earlier posts, I do not use software/laptop/projector in my meetings because it is just not a good, interactive way to run a meeting. I use a whiteboard, flip-charts, and Post-Its. Later, I use software to capture it.

P.S. – Please pardon and ignore the horrid use of the generic term ‘user’ in my story list. We typically use personas, the focus of this post however is the story trees.